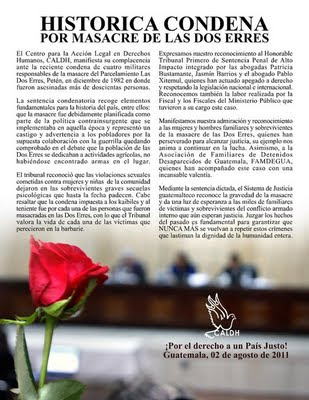 In July, almost 13,000 residents from two municipalities in the department of Santa Rosa voted against all mining projects on their land.  The municipalities are two of five in the department of Santa Rosa affected by the Escobal project, a silver deposit owned by Canadian company Tahoe Resources.  Since 2005, more than 700,000 people throughout Guatemala have democratically voted NO to large-scale development projects, such as mining and hydroelectric dams, in more than 60 community referendums.
First Referendum in Santa Rosa: 98.87% say NO to Chemical Metal Mining
On July 3rd, 7,602 residents of the municipality of Nueva Santa Rosa participated in the community referendum.  The press release by CODIDENA (Consejo Diocesano de Defensa de la Naturaleza Santa Rosa, Guatemala), Lideres Principales Hablando del Pueblo Xin-Ka, the Colectivo Ecologista MadreSelva, CALAS, and WAQIB’ Kej stated: “The consultation convened by the City Council at the request of residents of the municipality, gave a result that clearly reflects the NO to mining and YES to Life, with 98.87% voting “No” and 1.13% voting “Yes.”
Second Referendum in Santa Rosa: 98.34% Say NO to Chemical Metal Mining
A week later, on Sunday, July 10th, the neighboring municipality of Santa Rosa de Lima organized the second community referendum in the region.  Late that evening, the mayor declared the municipality of Santa Rosa de Lima “Free of Chemical Metal Mining”.  Of the 5,338 residents that participated, 98.34% voted “No” and 1.66% voted “Yes” to metal mining projects.

After acquiring the Escobal project, McArthur expected little opposition from the local population. In September 2010, during a presentation at the Denver Gold Conference, McArthur stressed that “The Escobal project is in a region that is receptive to the mining industry...We are not in the Guatemalan Mayan highlands; we are down in the southeast portion of the country. We will not have the indigenous issues that Marlin and some of the other mines in the country have had.”
With a third referendum underway in another municipality near the Escobal project, the population is demonstrating its opposition to metal mining based on rights defined in Guatemala's municipal code.  Tahoe Resources lawyers have challenged the validity of this type of referendum.

Pro-mining propaganda is not new in the region.  Transnational companies have spent large sums of money on publicity in mass media.  In San Rafael Las Flores, Santa Rosa, the community tabloid Buenos Días has been published since October 2010:


For further information on the communities' ongoing resistance to mining, please read COPAE's photo essay: "The Destiny of San Rafael las Flores" (in Spanish).
Posted by NISGUA - Network in Solidarity with the People of Guatemala No comments: